Also got an emergency alert on my phone as the warning was issued. Here is how @California_ISO classifies the different energy emergency levels. We are now at level 3/RED. @FoxNews pic.twitter.com/twTk97Ux5n

California is scrambling. It previously declared it will source 60% of its power from renewables by 2030 and rely on 100% carbon-free electricity by 2045. However, since the massive brownout events of August 2020, the state has scrambled to adjust its power generating portfolio. For instance, it has brought on another geo-thermal power plant; Casa Diablo IV is a state-of-the-art air-cooled binary facility located in Mammoth Lakes, California. Sadly, it supplies just 9.4 MW. Too little to truly help.

When in doubt opt for nuclear power. If you care about such things it has zero carbon emissions. It’s reliable and safe unless it’s owned by communists or not built to meet every possible weather or tectonic threat. Nuclear subs build decades ago are still in operation and very safe. France doesn’t have an energy problem because it was wise enough to build nuclear power plants and ignore the hippie bleating from Green Germans protesting: “Atomkraft – Nein Danke”. 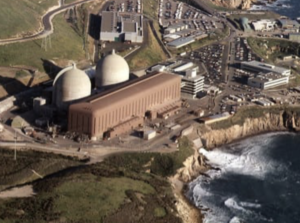 In desperation, and in advance of the November elections, California’s lawmakers passed Senate Bill 846, effectively offering Pacific Gas and Electric (PG&E) a pathway to keep the Diablo Canyon nuclear power plant open until at least 2030.

The bill, authored by Assemblymember Jordan Cunningham, a Republican from San Luis Obispo, and Democratic state Sen.Bill Dodd of Napa, passed the California Assembly by 69–3 on Sept. 1, and 31–1 on the Senate Floor on Aug. 31.

If signed by California’s governor, as is expected, the measure will make up to $1.4 billion available to California’s Department of Water Resources (DWR) under a newly established Diablo Canyon Extension Fund in the state treasury. The funds would then be doled out as loans to facilitate the extension of Diablo Canyon’s operating period. As significantly, the bill specifies that the final compliance date of the once-through cooling policy for the power plant is Oct. 31, 2030.