With consumer prices and inflation at 40-year highs and the Social Security cost-of-living adjustment (COLA) lagging, retirees are seeing their benefits stretched to the limit.

“Credit card debt in retirement can quickly get out of hand, and this is especially true during periods when interest rates climb,” says Mary Johnson, Social Security, and Medicare policy analyst for The Senior Citizens League. “We are in a steeply inflationary period when rising interest rates will mean many consumers will need to reduce the amount of debt that they are carrying on credit cards month to month in order to keep that cost manageable,” Johnson says. The Federal Reserve recently approved the first of several short-term interest rate hikes for the first time since December of 2018. 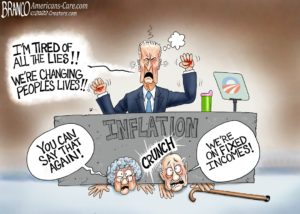 The Senior Citizens League’s online survey which was conducted from mid – January through February of 2022, indicates that 49 percent of the 3,028 survey respondents report that they have spent through emergency savings or have no savings at all. Consequently, those older households carrying debt on consumer credit cards can face debilitating financial consequences when interest rates increase.

Most credit card rates are variable and will edge up each time the Fed takes action. Interest rates on debt add additional costs that can be extremely difficult to eliminate for people living on fixed incomes. Consumer credit cards typically have fairly high rates of interest. In its Consumer Credit report released March 7, 2022, the Federal Reserve reported annual credit card interest rates of 16.4 percent for November 2021, the most recent month data is available.

“Inflation has many older households struggling to stay afloat,” Johnson says. “As difficult as these times may seem right now, it’s important to have a plan to reduce debt — and that would mean putting less on credit cards, and paying more of the balance,” Johnson says. “The Senior Citizens League believes that passage of legislation to provide a $1,400 stimulus payment could make an enormous difference for many of these households,” Johnson notes.

Carrying debt in retirement was a rapidly growing trend even before the COVID pandemic. According to a report by the Congressional Research Service, the percentage of older households who had any debt increased from 37.8% in 1989 to 61.1% in 2016. During the same time, the median (mid-level) amount of debt among older households with debt increased from $7,463 to $31,050 (in 2016 dollars) respectively.

Older adults who are having trouble paying off accumulating credit card debt can find information and learn about programs that could lower their costs on the website of the National Council on Aging. Their online Age Well Planner can help assess needs and provide information about financial assistance that can help lower some costs, boost some savings, and may help trim debt.

Even though retirees received the highest Social Security cost of living adjustment (COLA) in 40 years, inflation rapidly outpaced the annual increase. The Senior Citizens League tracks inflation monthly and notes that using the same consumer price index that is used to calculate the cost-of-living adjustment (COLA) the CPI-W, inflation through February of 2022 is 8.6 percent higher than February 2021 a full 2.7 percentage points higher than the 5.9 percent COLA raised benefits. That means an average benefit of $1,564 which increased to $1,656.30 in January, would actually need to be $1,698.50 in March, or $42.20 more just to keep up with inflation.

Among the other common steps survey respondents had taken include applying for assistance with home heating or cooling costs, depleting a retirement or savings account, drawing down more retirement savings than usual or applying for a Medicare Savings Program or Medicare Extra Help for help with medical or prescription drug costs.

The Senior Citizens League continues to work for the enactment of a one-time $1,400 stimulus check to help Social Security recipients patch the shortfall between what they received in their annual 5.9 percent COLA and current inflation — without having to put more debt on their credit cards.