Skip to content
Few people realize that the Centers for Disease Control and Prevention (CDC) was founded in the immediate aftermath of World War II for a limited and very specific purpose – to eradicate malaria. In recent decades, however, the Atlanta-based bureaucracy has become the poster child for regulatory mission creep.
Its huge regulatory wings need to be clipped. 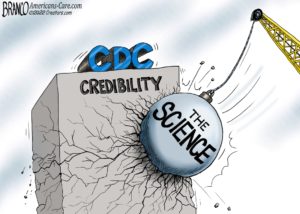 CDC was established in 1946 to attack and control malaria, which at the time was endemic in the southern United States (hence the agency’s being headquartered in Atlanta, Georgia, rather than Washington, D.C.). The bureaucracy set out to accomplish its limited mission with 369 employees and a budget of $1 million. The CDC actually was quite successful at eradicating malaria as a significant health concern, largely by attacking breeding areas for mosquitos with the insecticide DDT (which, since the early 1970s has been banned by the EPA).
After achieving its statutorily defined goal within a few years, like any worthy bureaucracy, the leadership of the CDC set about searching for new responsibilities to assume, and for which – of course – more taxpayer funding was needed. Thus was launched one of the great examples of government “mission creep.”
From that early staff of 369 employees, the CDC has mushroomed into a sprawling bureaucratic behemoth with myriad components, populated by more than 21,000 full-time employees and a budget as proposed for FY 2023 of nearly $47.5 billion. Along the way it has managed to pull into its bureaucratic orbit such non-disease related responsibilities as traffic accidents, obesity, and, of course, gun control.
The bureaucratic staying power wielded by the CDC is best illustrated in the fact that, despite repeated and successful efforts by Republican-led congresses to defund the agency’s forays into gun-violence prevention over the past two decades, the Biden administration resurrected the mission and made it a top priority.
It is the CDC’s actions over the course of the COVID-19 pandemic, however, that have thrust it into the public limelight as never before, in a way that highlights the need to clip the wings of this bloated bureaucracy.
While the most notorious public face of the federal government’s COVID mandates has been Dr. Anthony Fauci, who is not employed by the CDC but rather by a sister health agency, the National Institutes of Health (NIH) – which in many respects duplicates activities of components of the CDC – it is the CDC that earlier this month requested that the Department of Justice appeal the ruling by Florida federal Judge Kathryn Kimball Mizelle that the agency lacked legal authority to mandate mask wearing on common carriers, most notably, commercial air carriers, which the agency mandated by administrative fiat in February 2021.
The 59-page opinion by Judge Kimball Mizelle is rich with historical, statutory and legislative analysis. While the judge does not explicitly label the CDC mask mandate decision as “arrogant,” she does characterize as “breathtaking” the manner by which the CDC concluded that its regulatory authority allowed it to impose a nationwide mask mandate for all manner of public travel without any public input whatsoever. This is the clearest analysis to date of why this agency needs to be reined in.
Exhibiting its well-known hubris that it and it alone decides what is best for the health and safety of 332 million American citizens (and many millions more visitors to our country), the CDC statement tells the Justice Department to appeal Judge Kimball Mizelle’s order simply because it considers its earlier actions fully “lawful” (and therefore, unquestionable).
Interestingly, in the two-paragraph statement, the CDC noted that its continued authority is based on the fact that masks are “most beneficial in crowded or  poorly ventilated locations, such as the transportation corridor.” This statement is demonstrably false, insofar as commercial airline cabins are expertly and continuously well-ventilated, even according to federal government studies by the U.S. Department of Defense.
True to its exalted status as a self-centered federal agency enamored of its own mission, the CDC does not let facts stand in the way of its regulatory powers. Perhaps Congress will do so if the GOP regains control of the Legislative Branch in the November elections. If not, the CDC will continue to increase its already massive regulatory footprint in the name of “public health” as it defines it.
Bob Barr represented Georgia’s Seventh District in the U.S. House of Representatives from 1995 to 2003. He served as the United States Attorney in Atlanta from 1986 to 1990 and was an official with the CIA in the 1970s. He now practices law in Atlanta, Georgia and serves as head of Liberty Guard. Originally published in the Daily Caller. Original here.