This meme has been circulating for a while now.  It backs up what I’ve been saying for months.  We just don’t have the capacity in our electric grid to handle the added drain that a huge influx of electric cars will bring. 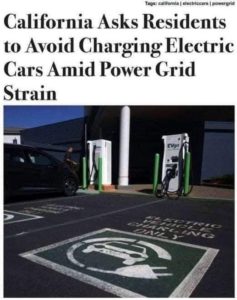 But California doesn’t care.  They are mandating electric cars anyway.

So the left-wing apologists are now weighing in.

This meme is based on news from summer 2021.  Fact checkers are all over it.  Not true!

They are demanding removal, context, banning!  It messes with their narrative.

But it was true a year ago.  Summer in California – and the rest of the country – is hot.  Everyone turns on their air conditioners.  And they do whatever they can to stay cool.

And other than swimming in the local lake, that generally involves electricity.

Maybe the California grid can handle the load of extra electric cars in the cooler months.

But Californians, and maybe the rest of the country, will be losing their AC, suffering brownouts and blackouts, and tolerating a lower quality of life so the electric car fetish can continue.

Not the way I want to live, how about you?